You are here: Home / Strain Reviews / Super Green Malaysian Kratom Review – How To Be 10% Better
Kratom IQ is reader-supported. At no cost to you, we may receive a commission when you purchase products recommended and linked to on this site. Learn more here.

If you’d have met me about 5 years ago and told me that in the future I’d be using a plant every day to become a much better, more focused, motivated, confident and happier person along with it giving me awesome super social powers that were smoother than butter, I’d have told you you were nuts.

Not until relatively recently I thought herbs were for hippies, low lives and gypsies.

How ignorant I was.

I would do the same thing Neo did in the Matrix; I’d take it without flinching an eye.

And you’re in luck my friends, because there is something out there that in this day and age, can do just that:

Okay… enough with the Matrix references

What is Super Green Malay Kratom?

Green Malaysian Kratom is natively found in the country of Malaysia in Southeast Asia, home to beautiful rain forests, beaches and iconic skyscrapers.

Sometimes referred to as Elephant Kratom, Green Malay Kratom, ‘SGM’ or preceded by the word “Super”, this actually isn’t just some silly term created by “Smoke shops” to make it sound different from any other green strain.

It is in this region of the world where the Mitragyna Speciosa tree thrives, producing massive leafs that are rich in alkaloids known to produce a wide range of desired effects and benefits. It is known as ‘super green’, due to this Malay Kratom being harvested when it is most potent, when the alkaloids present offer the combined effects of an energy booster that enhances focus without unpleasant sensations or overly stimulating effects.

What is Green Malay Kratom?

Green Malay Kratom strains are made from ‘green’ Kratom leaf. In other words, Green Malay is made from Mitragyna Speciosa leaves picked early in the maturation cycle, when the veins of the leaf are still green in color. 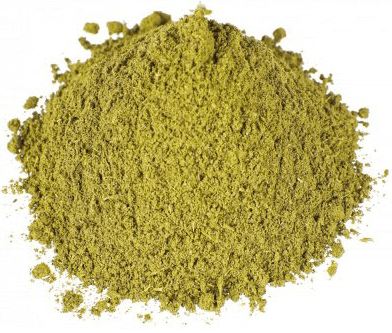 Green Malay Kratom is sought out for its euphoric effects, uplifting energy boost, and mood enhancement, as well as the potential to improve physical performance without being too stimulating.

What is Elephant Kratom?

The word “super” or “Elephant” is in fact an indication that a strain consists of the biggest Kratom leaves harvested by farmers to include the highest amount of alkaloid content ie. leaves like enormous Elephant ears. Other examples include Super Green Indo Kratom and Super White Borneo.

“Green Malay” at Happy Hippo Herbals, affectionally known as “Elite Elephant”, is one of their highest quality moderate strains.

Being a green vein Kratom, this strain typically has a mixed bag of effects.

What Makes Green Malay So Special?

To date, more than 40 alkaloids have been identified in Kratom, with Mitragynine and 7-Hydroxymitragynine being the two most prevalent. Together, these alkaloids, along with minor alkaloids, produce a synergistic entourage effect that offers pain relief, euphoria, improved mood, energy, calm, stress relief and more.

Notable with green vein Kratom, is that the strains embody the BEST of both white and red vein strains, all in a mellow and smooth green vein that is incredibly well balanced.

What is it Like to Take Green Malay Kratom

These are NOT the words you’d use to describe super Malaysian green vein Kratom.

I would use words such as “mild, minimal, and gentle” with this strain.

Malaysian Kratom strains are often categorized as “weak” by most users but either these users are just getting bunk Kratom from an untrusted vendor or don’t know how to appreciate the unique qualities of the aroma certain strains produce.

Ironically, I probably fall under that category of people since I’m a sucker for stronger and more powerful strains.

Kratom aromas can be a bit like viewing art. A lot of us prefer art that consists of an amazing portrait or painting depicting an event, person, or situation. But there is that certain type of art that looks bizarre and it’s up to you to find the beauty and meaning behind it.

As a green vein, Green Malay prefers to stay in the background. There’s no overwhelming burst of energy like you’d get from high potency “fast” strains such as Green Maeng Da or Red Vein Thai, or a sedative aroma you’d experience from “slow” strains such as Yellow Sumatra or Bali.

What you do feel is just slightly better than “normal”.

I can already hear you objecting and saying that’s “lame”. But hear me out.

It keeps you in a much more consistent, level-headed, cool mood than the other types of Kratom will ever do. It’s similar to waking up on a warm sunny day after having slept a good nine hours and feeling wide awake and ready to take on the world.

Usually that feeling begins to disappear around late noon as you start getting drowsy and overwhelmed with work.

But Super Green Malaysian allows you to keep that “feeling” for the rest of the day. While everyone is getting drowsy, tired, lousy, and dragging their feet by late noon, you still haven’t skipped a single beat.

It’s mild but you’re ahead of the crowd… just about 10% better.

What to Expect When Using Green Malay Kratom

Green Malay Kratom dosage can have a big impact on the effects noticed. Kratom is a ‘dose dependent’ supplement, with a small dose resulting in a more stimulating energy boost and potential to enhance physical performance and focus. While a larger dose is associated with more potent effects, including reducing muscle pains and tension, producing a deep relaxing effect, and euphoria. Many prefer the sedating effects of large doses for relaxing and unwinding after a long day at work, or before bed to aid with sleep. Others enjoy a low dose in the morning or mid-day drag to boost energy levels and produce a relaxing effect that doesn’t leave them groggy, but rather focused and motivated to tackle the task at hand. Those who consume Kratom often have a range of reasons and purposes for doing so, making the answer to this question a complex one. Below I’ll cover the top product categories for green Malay so you can get an idea of which might be best for your own situation and needs.

Green Malay Kratom Powder: Looking to buy green Malay Kratom? Powder is one of the most popular and versatile ways to enjoy all the popular strains. Versatile and affordable, powder can be used in foods, drinks and even shotgunned right into your mouth and washed down with juice (if you’re brave enough for it). That said, some consumers don’t like the inconvenience (or mess… Kratom can stain). Powder also isn’t ideal for taking Kratom ‘on the go’.

Capsules: Green Malay capsules eliminate the need for a precise digital scale to weigh out doses. Capsules also make taking Kratom when not at home discreet and reliable without the inconvenience of needing to prepare a thing. That said, capsules are also the most expensive way to use Kratom and some may find it difficult or annoying to swallow enough caps to reach the desired dose.

Extract: Extracts are highly concentrated and potent forms of Kratom. Usually suspended in oil or alcohol, a little extract goes a LONG way. Extracts can be taken sublingually (under the tongue) for faster effects, swallowed, or dripped onto food or mixed in beverages.

Green Malay Leaves: Although more difficult to source, fresh green Malay leaves can be used to make tea, grind into your own powder, or even chew on just like Southeast Asian natives did ages ago.

What is a Good Starting Dose for Green Malay?

As an unregulated dietary supplement, there isn’t a standard or recommended dosage for Green Malay or other Kratom strains.

When trying a green Malay strain for the first time, I always suggest taking lower doses to assess how your body reacts to the product. As a minimum dose, this is usually around 0.5g to 1g. You might not feel much from this dose (at all), but its a great starting point for those who aren’t experienced Kratom users.

With a fantastic blend of active alkaloids, Green Malay offers something unique from the different Kratom strains you may have tried in the past. That said, high quality products will always have a dose-dependent effect, with a higher dose leaning more towards the sedating and relaxing side, great for alleviating tension or for pain relief, and a low dose leaning more towards an energizing effect.

Due to its mild effects, I usually use about 5 grams when burning a high quality version like this one. I experimented with as much as 11 grams before and I have concluded that it results in the same outcome.

So once you have found your stable “sweet spot“, there is usually no reason to up the dosage unless you’re starting to build tolerance.

On the plus side, taking “too high” doses of this specific plant is less likely to result in nausea or side effects, so the most you’re going to end up with is a half empty bag and a confused irritated version of yourself because you wasted all that Kratom in one day.

There isn’t a clinically established dose regimen for Kratom products. However, work is being done across several states to implement quality and dosing standards.

For now, the correct dosage is unique to YOU, and can vary based on age, sex, body weight, height, digestive problems, physiology and more. You may also notice that taking green Malay on an empty stomach could either increase or decrease effects.

Always start with a lower dose and then increase as necessary to reach desired effects. And remember, if you take any type of medication or have a medical conditions, always speak to your doctor BEFORE taking any new supplement or herb.

That pretty much sums up our review of Super Green Malaysian AKA Elite Elephant Kratom. Calling it just “mild” wouldn’t do this Kratom strain justice.

Just like there are people that like mild sauce on their food instead of a mouth watering, ball busting, tongue scorching hot sauce; there are people out there that prefer a milder smoother experience that gets them through the day.

It all comes down to preference. “Different strokes for different folks”, as they say.

And even if you are someone that likes the strong powerful strains like I do, you might actually end up appreciating the milder strains when you’re not in the mood to experience overwhelming aromas. Not every day calls for a Maeng Da.

Overall I’d rate it a 4/5 moderate strain. Kick back, relax, burn some green Malay Kratom powder and be just 10% better than the average joe.